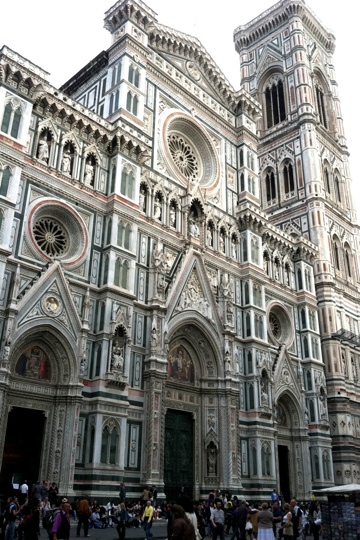 Before 9am I was on the bus to Firenze, an hour and 15 minute ride with views of the Tuscan countryside. Bellissimo! Once I arrived in Florence I made my way to the Duomo and bought a ticket to climb the campanile, which is also known as Giotto’s Bell Tower. It is 276 feet high and there are 414 steps, which are about 30 inches wide, and much more narrow as the staircase spirals. There is only one staircase, so visitors use it to ascend and descend, necessitating that you have to stand sideways at times to allow a group to go in the opposite direction. Thank goodness it was not July or August, or the heat would have been unbearable.

There were a few levels where you could stop and walk around, so I had a chance to catch my breath. It is a strenuous climb, as even young people were huffing and puffing and sweating by the time they reached the top. The last 60 or so steps, those who were descending were offering words of encouragement to those going up.

Once at the top however, the climb was well worth it. The views were stunning and I could see all of Florence below and also the surrounding countryside. It was truly spectacular!

Afterwards, I made my way to the famous Ponte Vecchio, which is lined with jewelry shops. I was on a mission to look for a particular type of cameo for my daugter-in-law, but had no luck.

I stopped for lunch at a wonderful outdoor restaurant, Reginella, near the Accademia, and had a margherita pizza and coca light for the unbelievable price of 8 euros, a special.

The young waiters made me laugh, as they were eyeing all the young girls that walked by, and in typical Italian style, calling after them, asking where have they been all their lives, saying “don’t worry, I’m not married,” and smiling. They spoke very good English and I joked with them about their flirting, and they told me that it is a hard job but someone has to do it. They really knew how to have fun at work.

After lunch it was time for some serious shopping at the San Lorenzo Market. Having been here before, I knew that I could find quality leather bags and silk ties at great prices, so I had a great time for the next two hours, and got everything I needed and then some! The vendors were very nice, and not at all pushy. If you bought more than one item, or were paying in cash, they were happy to make deals. I left there a happy shopper.

I had hoped to have time to visit Fiesole, a short bus ride from Firenze, and by 4:30pm I was on my way there, buying a bus ticket for two euros on the bus. Thanks to my friend Tamela, who had visited this small town, I knew that I would be able to see all of Firenze from this hilltop town.

When I arrived, I had to hike up a very steep hill on via San Francesco, which was at least 30 degrees, but it seemed more like 45. Thank goodness it was only a ten minute walk with stops, as I was carrying a bag with all my purchases from a day of shopping in Firenze!

No matter how hard the climb, the views were totally worth it. It is 5pm and I am sitting in a public garden near the top of the hill. The church bells are ringing, birds are chirping, and I feel a cool gentle breeze, as I am looking at all of Florence from high above. It is a beautiful sight with the red tile roofs, and the lush green from surrounding Tuscany. What a nice oasis from the faster pace of Florence.

7 Responses to Firenze and Fiesole