Today looked like rain and I was so glad I had taken the boat to Capri yesterday. This was a good day to write and catch up on laundry. I found a hotel nearby, Hotel San Francesco, that had Wi-fi and would let me sit in their lobby and use it for a reasonable fee.

So I was able to catch up on my blog and writing. While I was there the rain started and it poured for several hours, so I could not have timed it any better. A few people who were on the boat yesterday to Capri were also in the hotel lobby, so we shared a few stories. It’ s always nice to meet people who are as excited as I am about traveling in Italy.

Eventually the rain slowed down to just a drizzle and I decided to head back to he ceramics shop in case I didn’t have a chance tomorrow. I was disappointed that Maria wasn’t there but within a short time she arrived, and I had a chance to take a photo with both them. 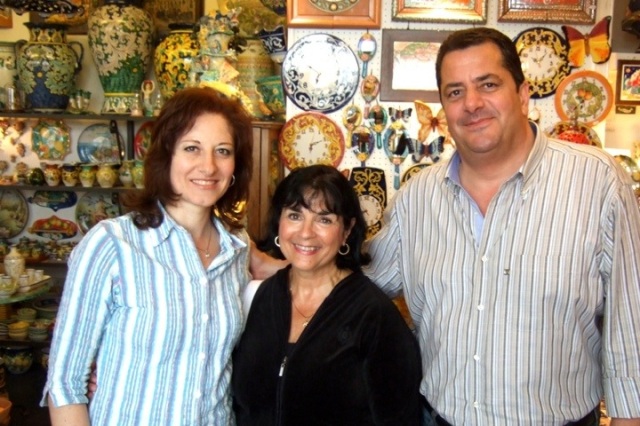 They are both so down to earth and just genuinely nice people. I am so glad that I met them. I said my goodbyes but only after Pasquale gave me a special gift for good luck. It was the “occhio di Santa Lucia,” and he explained that it comes from an animal of the sea, and that it has to be given as a gift. I was very touched.

On the way home I decided to return to La Vela for dinner and enjoyed a glass of wine and marinara pizza. Once again, compliments of the restaurant, i was treated to a bibite made with orange, sugar, carbonated water and lemon. It was very refreshing. And once again the seaweed bruschetta appeared at my table. Needless to say I could not eat all this food but it was delicious. 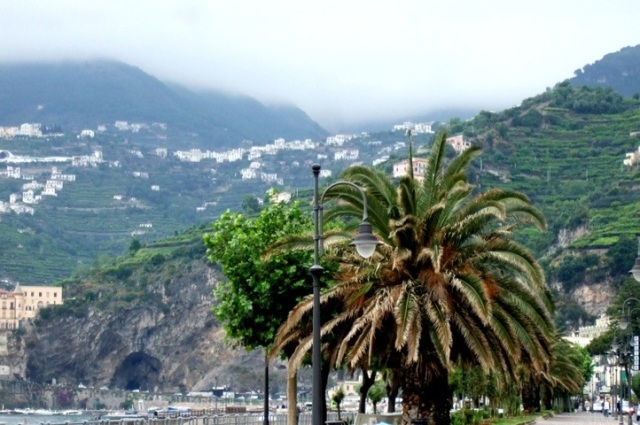 I walked home and decided to go to sleep early, thanks to the wine. Tomorrow is a holiday in Italy. It is the celebration of 150 years as a unified country. It will be interesting to see how a small town celebrates. Buona notte.

3 Responses to Rainy Day in Maiori