A Day at the Beach in San Remo

This morning I did some writing and then spent the whole day at the beach. There wasn’t a cloud in the sky and it was so relaxing. I went swimming with Tammy, and the water was very refreshing.

The beach was crowded today and I loved watching the people. There were a lot of families with small children, and it was nice to see both the mammas and papàs taking care of them. Some of the children also had their grandparents with them.

The teenagers were playing ball in the water, and some were playing something similar to ping pong without a net. Everyone seemed happy.

There were plenty of vendors coming around on the beach selling anything from sunglasses to bandanas to knock-off purses to watches to bubble machines to jewelry and clothing. I was fascinated watching the strategy of two particular guys, who were actually good salesmen, because several people bought items from them.

One was selling clothes, and he was very pleasant and seemed to establish a relationship and make friends with the entire family. Soon he was sitting down with them and they were trying on different items over their beach clothes. He had a selection of shorts and tops mostly.

Not long afterwards, another guy with a similar strategy came by this same family, and he was selling purses. He sat down, made friends with them, and spent time having a conversation with the man, maybe a husband, while the women were deciding about the purses. He actually placed his hand on the man’s knee a few times in a friendly gesture. One woman bought a purse and everyone seemed happy. This was one-stop shopping at San Remo beach.

Later when this guy passed by Tammy and myself, he asked if we wanted anything from “Thomas’s boutique on the beach.” This was great free entertainment.

The guy I really loved though was the one selling coconut. Fresh coconut is a popular thing in the summer in Italy. I have seen it in Milano and in other places like Siena. This guy carried a bucket of water and another container of fresh coconut. He had a megaphone attached to his belt with a prerecorded announcement to alert everyone about the coconut for sale. Plenty of people were buying it too.

The entire day at the beach I never heard anyone yelling or arguing. Most people, from what I could tell, were Italians, maybe at the beach for the weekend or vacation. It was a an amazing day. I was so glad I did not go to Monaco instead. 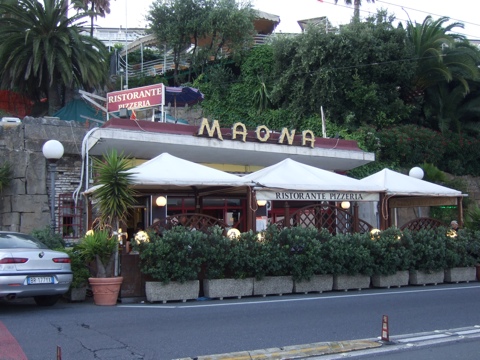 Our last dinner here we went to a place Tammy had found earlier, Maona Pizzeria, and it was owned by two brothers, one of whom at least, has been here for the last 26 years.

His brother was the chef and when he started making our pizzas we could see him and we heard him singing! In the tiny window of the cucina, we could see fresh basil and Italian parsley growing in pots.

You cannot get any fresher than that! We ended the evening with a walk and I had some gelato. 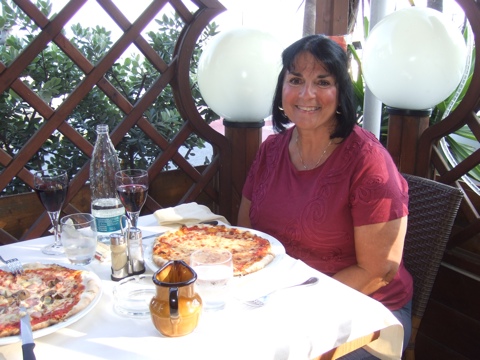 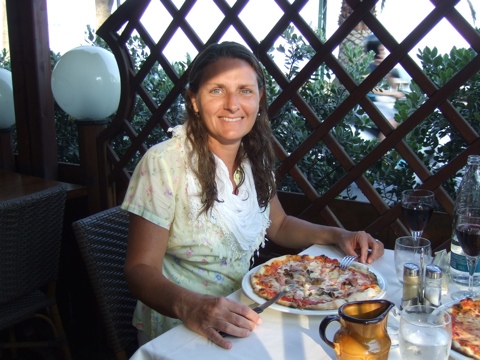 1 Response to A Day at the Beach in San Remo