CONTEST IS NOW CLOSED. SCROLL TO BOTTOM TO SEE WHO WON!

Today I am honored to introduce you to a true Italian artisan from Venice.  Marco Jovon has been designing and creating cameos since 1998. He continues the tradition started by his grandfather, Luciano Jovon, who began handcrafting cameos in Venice over eighty years ago. Luciano’s son Bruno followed in his father’s footsteps and expanded their jewelry-making to include corals. These made-by-hand jewelry items have been sold in the same shop, Eredi Jovon, on the famed Rialto Bridge, since 1934. As Marco says, “since three generations we make this and we are proud to tell that we make it well!”

To celebrate Mother’s Day, Marco has decided to offer a beautiful one-of-a-kind cameo as a prize to the winner of a our drawing.

This stunning Maternity, mother and child Brooch and pendant together, first quality blu agate cameo, sterling silver set in the Venetian  style representing mother with a child. Valued at  €125 this beautiful cameo can be yours by entering this contest.

What is a cameo?
“A cameo is a piece of art, is a part of Italian history, something for the life, something that you can use but almost something that pointed out your taste for elegance and grace.”Not all cameos are alike. Some are not even authentic and instead are fake. Click here to learn how to spot the differences.

Shell   cameos must be hand crafted because the shell presents an uneven surface unsuitable for a machine-engraving.In addition to this the shell could easily break with a machine cut.

The shells which are mainly utilized for the realization of cameos are:

• Cassis Madascarensis: so called “SARDONICA”, hight appx 30 cm. ; chestnut brown on the bottom and perfectly white on the surface to be engraved.

• Cassis Rufa: so called “CORNIOLA”, in general height is appx 16 cm.,has an interior reddish layer; the exterior layer, for engraving, is pale-flesh-colored

• Other shell: Tigrina shell (Cypraea tigris); Red shell (Cornuta cassis); corallina shell (Strombus Gigas) Mother of pearl (Pinctada Margaritifera)
Shells from the Cassis Family are particularly adapt for engraving: in fact, the two layers of of color, clearly distinct from one another, allow the relief figure to stand out in the best way. 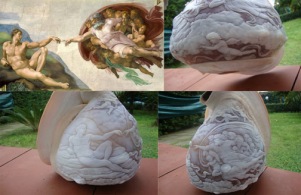 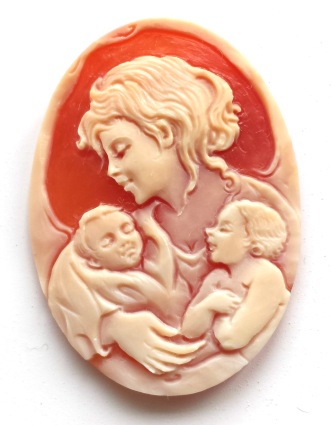 One of the most unique aspects to Eredi Jovon is Marco’s “portrait cameos customized.” Marco can create a custom portrait cameo  made directly from your photos or digital files.

AND NOW FOR THE CONTEST! Here are the rules:

2- If you are not doing so already, follow my blog, by simply clicking on the “Sign Me Up” button in the upper right-hand corner of this blog page.

Once you have executed the previous steps, leave a comment below to let me know you have entered the contest. Leave your  email address so we can contact you if you win.

The competition is open to everyone, worldwide. Prizes will either be sent from Italy to a valid address or delivered by me after I return from Italy in June.

The winner will be chosen at random from all valid entries, among all the people who have correctly completed all the indicated steps and left a comment (we will use this site http://www.randomresult.com/).

The  decision of the judges is final.

The competition. is open from today Monday 11th April 20 until Monday May 4th , 9am Italian time, or 3pm US DST

This entry was posted in Art, Made in Italy and tagged cameo, cameos, Contest, Eredi Jovon, jewelry, Made in Italy, Rialto Bridge, Venice. Bookmark the permalink.