Experience the Sassi of Matera 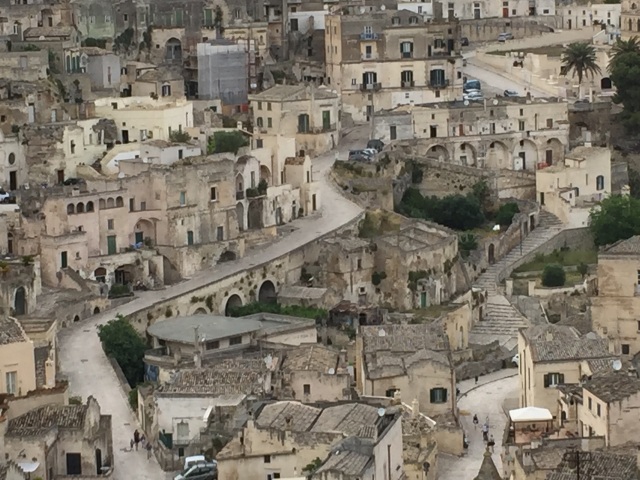 Matera in Basilicata has intrigued me for quite some time. Any photos I have seen or stories I have read about this place built from caves have been so  interesting. Finally now I can say that I  have experienced this captivating town in southern Italy.

This 2-minute video provides a brief overview of  Matera.

This past fall the European Commission chose Matera as one of its two capitals of European culture for 2019. 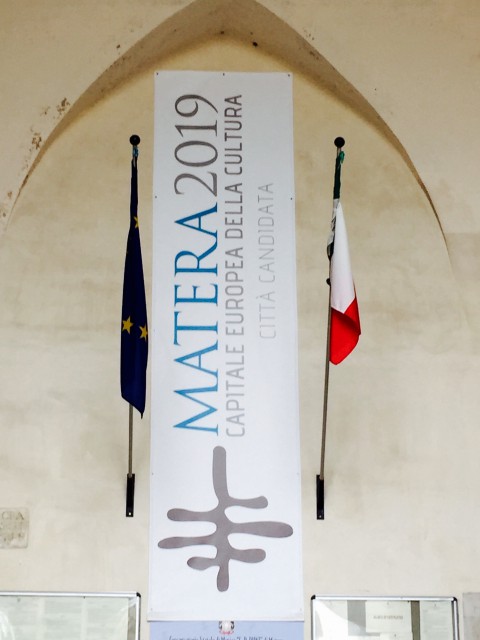 A recent article in  Smithsonian Magazine explains the history of Matera and how this unique UNESCO World heritage site advanced from being called “the shame of Italy” to a chic place to stay today.

Not only have I visited Matera, but I stayed in one of the sassi, or cave dwellings, which has been restored into a bed and breakfast. Our below ground suite in San Giovanni Vecchio Residenza was one of the oldest in Matera. 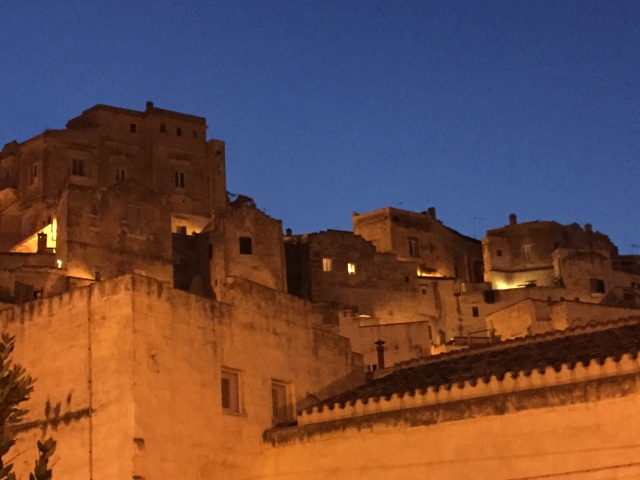 One of the highlights of staying here was the rooftop terrace with a phenomenal view. We enjoyed evening aperitivo here in this ambience where the scent of the blooming purple petunias permeated the night air. 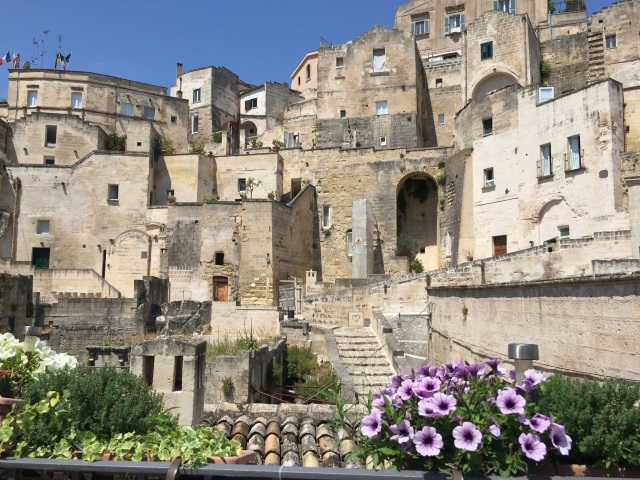 The managers who spoke excellent English were extremely nice, carrying our luggage down into our rooms. 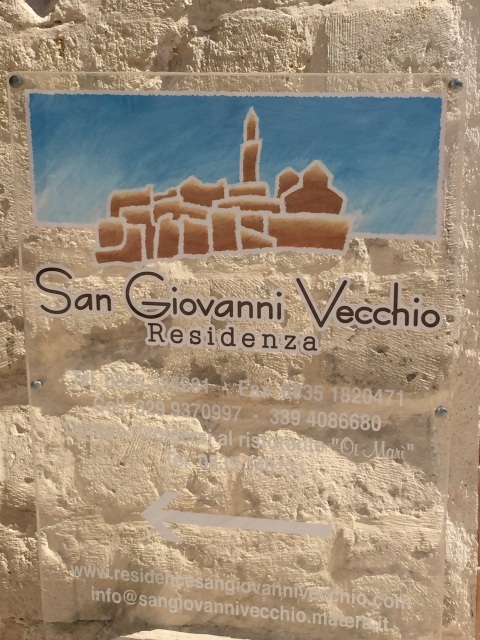 Fully restored with wi-fi and a modern bathroom and kitchen, this subterranean accomodation was an adjustment. Twelve steps down lead into the full suite and there are no windows except a small skylight  high above. It was a challenge which caused me to laugh as I rummaged through my suitcase on a curved floor. I don’t think the stone walls can fully hide the fact that this was once a cistern. 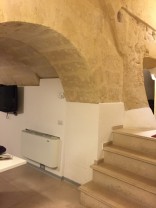 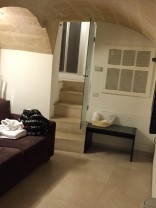 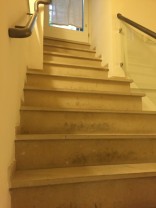 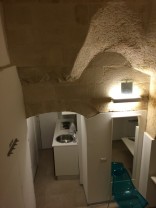 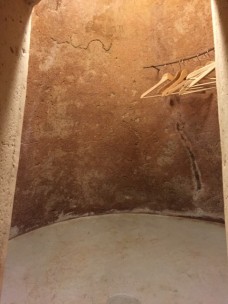 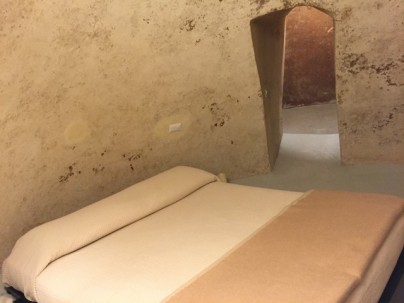 Matera is definitely not a place for anyone with mobility issues. There is a lot of walking and most of it is on uneven ground and staircases. 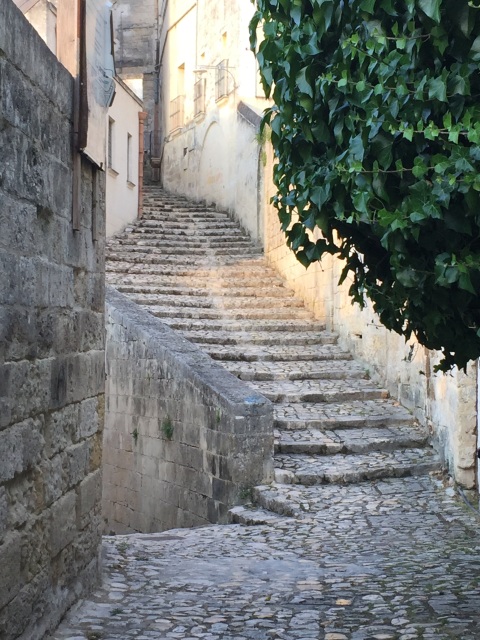 After walking  for miles the first day, we opted to pay the reasonable fee of  15 euros and had the opportunity to meet Andrea, a pleasant, intelligent, attractive young man with amazingly curly light brown hair. He was born in Matera and speaks with pride and an honest perspective when he shares his feelings from his heart with us. Regarding the changes to his city, he   explains  that while the restoration of Matera may be good for the economy, the additional onslaught of tourists may change his city forever. “Now nobody locks their doors, ” he says.”It’s not always about money. Some things are more  important.” I am impressed to hear so much wisdom from someone so young. 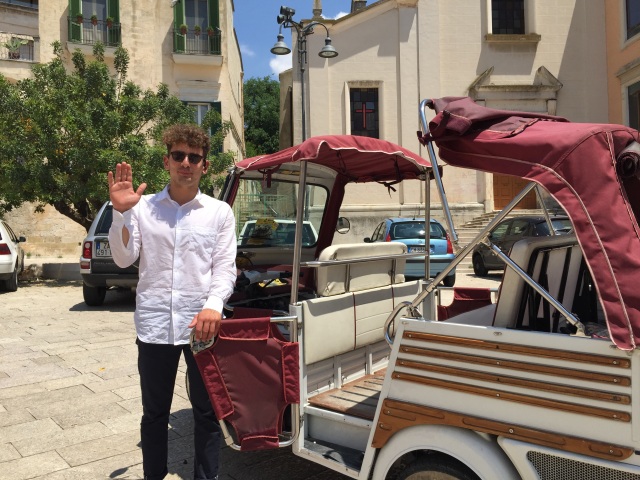 He not only showed us around his city, but gladly stopped for us to take photographs at various locations, and even recommended a favorite place to have lunch. Grazie, Andrea! 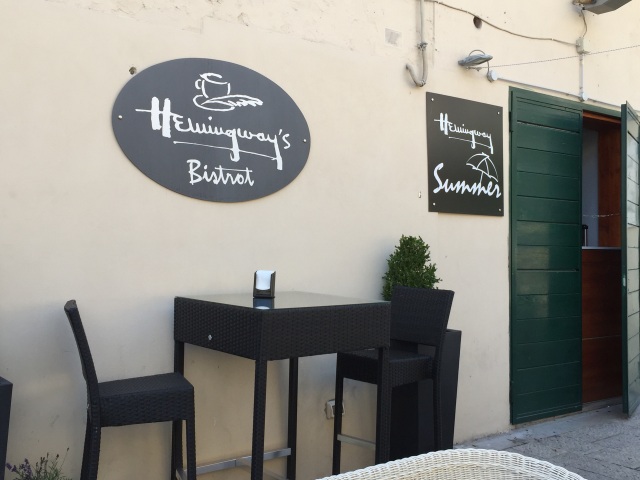 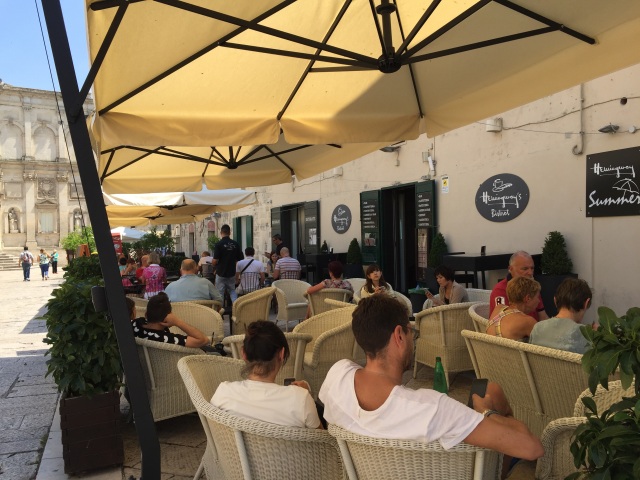 We had some of the best food and wine in Matera. Breakfasts at Oi Mari Ristorante and dinner outside at La Talpa were enjoyable. 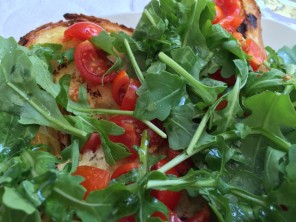 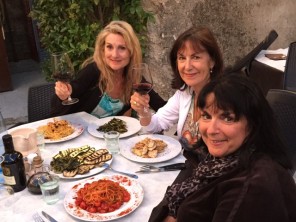 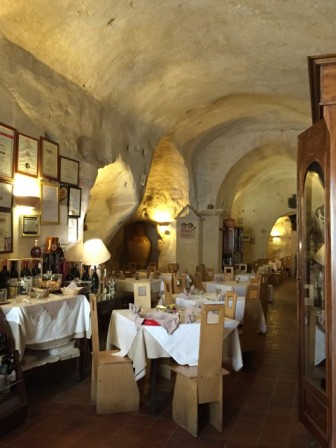 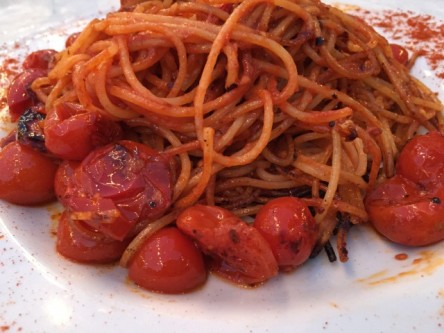 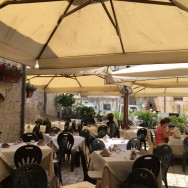 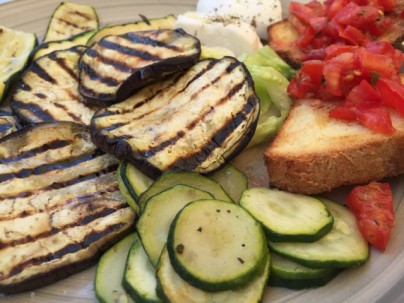 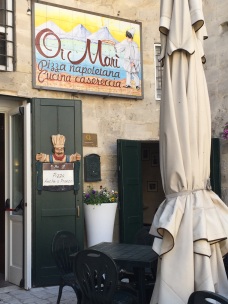 Because of the appearance of the Sassi in Matera, several movies have been filmed here. Most recently, some scenes from the re-make of Ben-Hur were shot here, and 1000 Matera residents had non-speaking parts in the film. 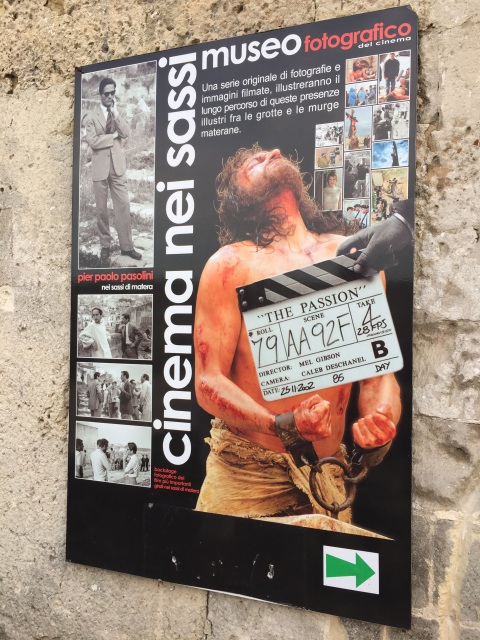 Mel Gibson’s 2004 film, The Passion of the Christ  was filmed here since the landscape resembles Jerusalem;  some scenes were filmed outside and some inside one of the 157 Rupestrian churches here. 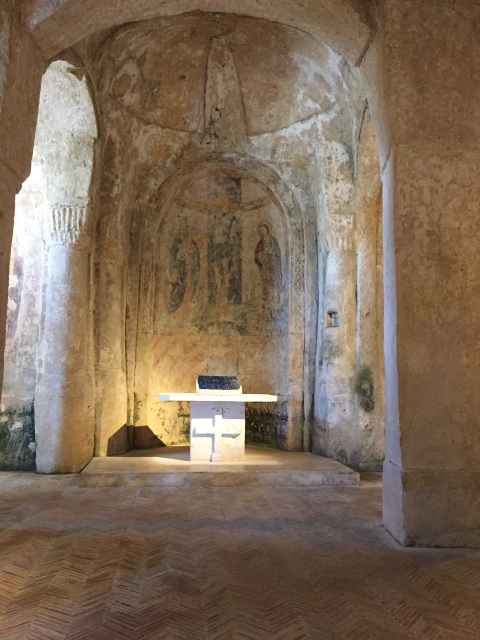 Inside the 12th century Church of  Madonna della Virtu, which is dug entirely in the rock. The frescoes are incredible. 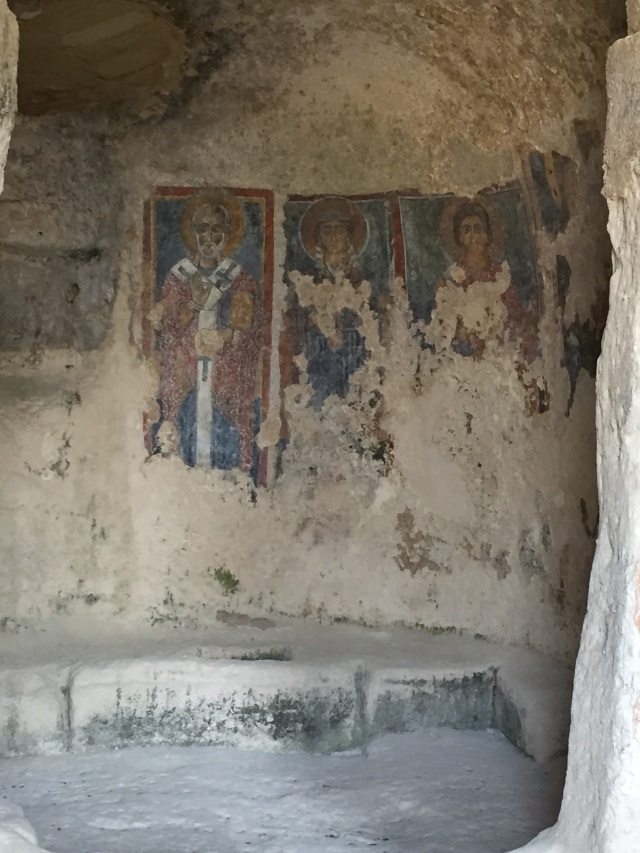 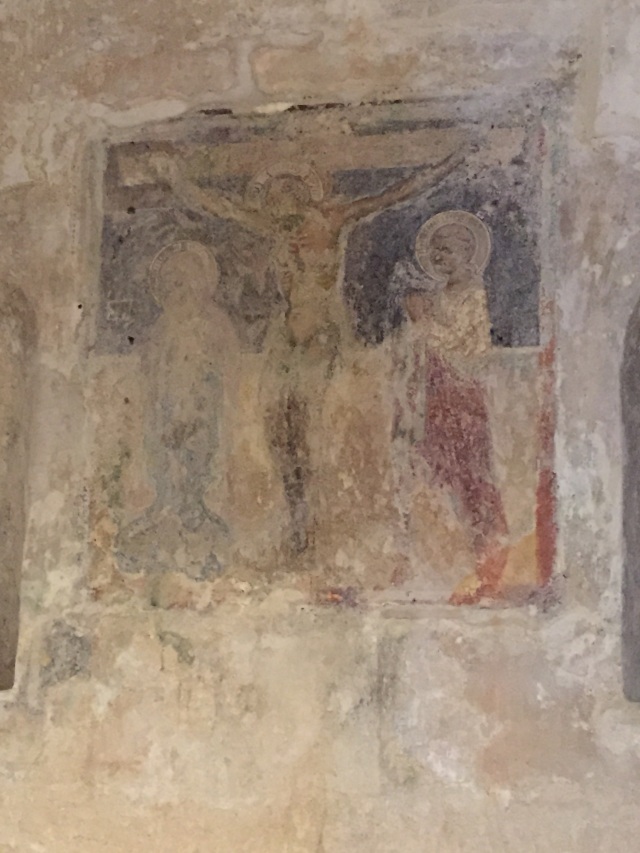 Matera is not as small as I had expected. The city has over 50,000 inhabitants, and these Sassi are in the centro storico, or historic district. I liked it that we saw few tourists except some group tours. I saw very few Americans here, but I think that will likely change within the next few years, leading up to the 2019 celebration of Matera as a capital of European culture.

This post only scratches the surface about Matera. Many more  stories can be told about the interesting museums, free-wandering healthy-looking cats, music which fills the air  from the Conservatory near Piazza Sedile, the  views from Piazza Duomo and the Duomo which is under a major restoration, and more. Stay tuned.

An award-winning author, Margie Miklas writes medical thrillers and travel memoirs about Italy, a place which has captured her passion for travel. She is also the creator and owner of the travel blog, Margie in Italy, and a contributing writer for an Italian-American newspaper. A retired critical-care nurse, she enjoys spending time with her family, including her three cats. Her favorite place is the beach, and she likes learning new computer skills, when she is not writing. A member of the Florida Writers Association, Margie makes her home in Florida.
View all posts by Margie Miklas →
This entry was posted in Italian History, Italian lifestyle and culture, Italy Travel, Italy Travel Planning, TRAVEL and tagged Basilicata, Italian culture, Italian culture and lifestyle, Italian Experience, Italian history, Italian lifestyle, Italians, Italy, Italy Photos, Italy travel, Matera, Matera reservations, Movies filmed in Italy, Sassi, Sassi accommodations, Sassi in Matera, Smithsonian Magazine, travel, travel planning, travel writing, trip to italy, visit italy. Bookmark the permalink.

27 Responses to Experience the Sassi of Matera