Driving in Italy – Some Thoughts

These posts seem to be spaced out more and more, and I apologize. I have been focused on writing My Love Affair with Sicily and have not posted anything here lately. Mi dispiace. I am sorry. By the way, I was hoping for an early spring release, but we’ll see. I am doing some rewriting now after a phone call with my editor.

The latest story that I have been writing about comes near the end of the book and I am in Palermo. Even though I was not the driver I cannot think of Palermo without remembering the nightmare driving situation there.

Driving and Parking in Sicily

Actually this is not something that only occurs in Palermo or other cities in Sicily, although I can personally attest to the craziness in Messina while I was driving there at night. And the parking is another story. It seems that it is OK to park in a crosswalk, to double park, and to park at the edge of an intersection. When in Italy, do as the Italian do…

I found this video about driving in Rome and had a good laugh; yes it is much easier to laugh while watching a YouTube video than actually being in the aggravating situation.  What is amazing to me though, is the reactions of the Italians.

Their viewpoint is that this is normal and that everyone sort of knows how to drive without traffic lights or signs or police officers.  In fact these are the comments on my blog and  videos on YouTube.

Maybe so, because truly I did not see too many cars involved in accidents but I did see plenty with dents and scratches; in fact most of them had some type of minor damage. 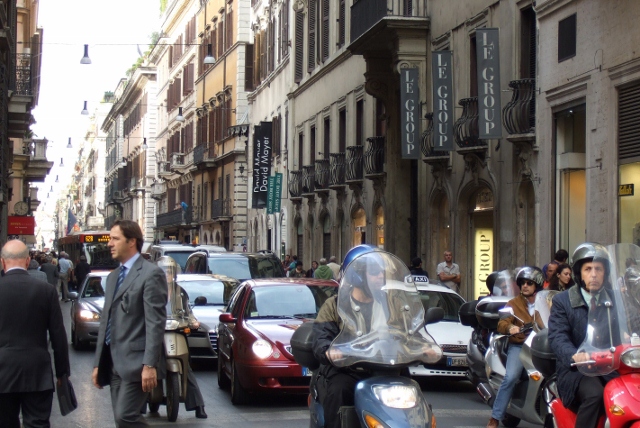 And then there was the bus driver in Taormina driving up to Castelmola. I was able to record his reactions as I sat in the first seat behind him.

Again, it’s funny when you are not the one driving.  As my Italian friends say with a shrug, “Boh.”

26 Responses to Driving in Italy – Some Thoughts