A Fountain of Joy in Siena

If you have been to Siena you couldn’t miss seeing the famous  Fonte Gaia or Fountain of Joy on the high side of Piazza del Campo. This fifteeenth-century white marble sculpted fountain and pool is one of a few medieval fountains in Siena with water supplied from ancient aqueducts and nearby canals in the surrounding hills of Tuscany. One of the top tourist attractions in Siena,  seldom is there a time when the fountain is not surrounded by people.

Built in 1419, the Fountain of Joy has been nicknamed “the queen of Sienese fountains.” Fonte Gaia has the distinction of being the highest fountain in Italy as its Siena location is 321 meters, or over 1000 feet above sea level. The water, once used by the townspeople for drinking and other needs, is not potable today.

The Fountain of Joy is a stunning piece of art and everyday thousands of locals and tourists alike photograph it, sit by it, throw coins into it and stare at this marvel sculpture. The elaborate panels surrounding the pool are actually copies of the original works of art, which are now housed in the nearby Palazzo Pubblico.

Siena’s most acclaimed sculptor, Jacopo delle Quercia, was commissioned to build the Fountain of Joy to replace an older fountain which featured the pagan statue of Venus. After the Black Plague claimed 80,000 lives in Siena, this pagan statue was blamed and Quercia replaced it with Fonte Gaia, dedicating it to the Virgin Mary. Once water flowed freely from the completed fountain the Siena people were celebrating with joy and thus the fountain was named. 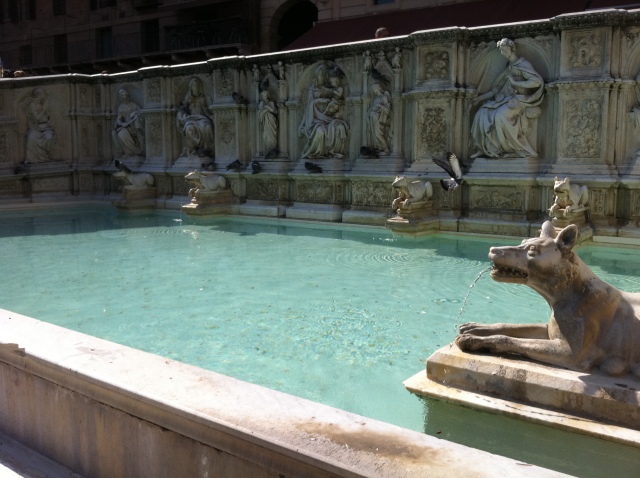 Some of Quercia’s sculptures on the sides of the fountain depict the creation of Adam and Eve and the flight from the Garden of Eden. In the center of the fountain, the Madonna and Child are the featured design. Two angels and a depiction of the cardinal virtues also adorn the center part of the fountain. In 1858 a replica (with some adaptations) replaced Quercia’s original fountain due to degrading of the structure.

The Campo is so huge,  the first time I visited I was overwhelmed. Taking in all the outside cafes and the interesting architecture of the various buildings  I did not see immediately this beautiful fountain . Throngs of people surrounded the fountain,  and it was not until I actually walked closer to it to find out why so many people were there, that I viewed and appreciated the Fountain of Joy as the masterpiece that it truly is.

Have you been to Siena? What was your first impression of the Campo? Did you throw a coin into the Fountain of Joy? 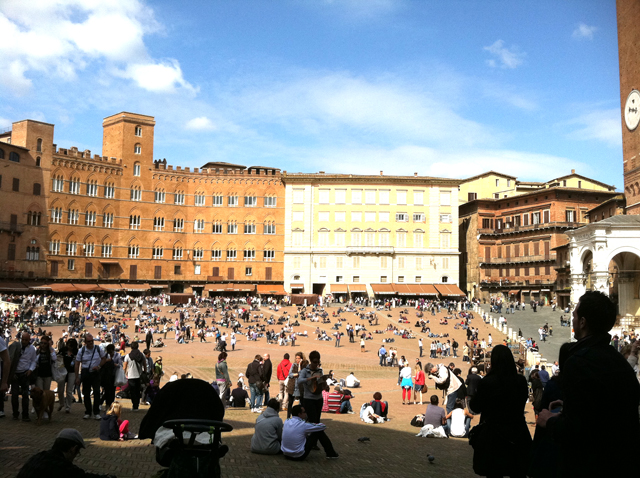 An award-winning author, Margie Miklas writes medical thrillers and travel memoirs about Italy, a place which has captured her passion for travel. She is also the creator and owner of the travel blog, Margie in Italy, and a contributing writer for an Italian-American newspaper. A retired critical-care nurse, she enjoys spending time with her family, including her three cats. Her favorite place is the beach, and she likes learning new computer skills, when she is not writing. A member of the Florida Writers Association, Margie makes her home in Florida.
View all posts by Margie Miklas →
This entry was posted in Art, Italian History, Italian lifestyle and culture, Italy Photo, Italy Travel, TRAVEL and tagged art, art in Piazza del Campo, Fonte Gaia, fountain of joy, Italian culture, Italian culture and lifestyle, Italian Experience, Italian lifestyle, Italy, Italy Photos, Italy travel, margieinitaly, photography, Photos, Piazza del Campo, scupture, Siena, travel, travel planning, travel writing, trip to italy, visit italy, writing. Bookmark the permalink.

8 Responses to A Fountain of Joy in Siena