Leaving Sicily and on to the Amalfi Coast

With less than three hours sleep, I woke up to the sound of the alarm on my phone at 3:45am, so I would be ready to leave for the Palermo airport by 4:30. We had to return the rental car and catch the 7AM flight to Napoli. Since the rental car return was not yet open, we deposited the keys and documents in the designated drop box, after parking the car in a spot we hoped would draw the least attention to the fender that was damaged in Siracusa.

Then we walked ten or fifteen minutes to the terminal. Although the time was 5:45 other passengers were here, and by 6 our check-in desk was open. We weighed our luggage and hoped it would meet the weight requirements of twenty kilograms, so we would not be forced to pay a penalty. Luckily all our bags were under, so we breathed sighs of relief.

After riding a bus to a spot farther away on the tarmac, we boarded our Volotea flight without problems and by 7:10 we were in the sky as the sun was rising. We landed in Naples just after 8. After retrieving our luggage in the ritiro bagagli, baggage claim, area, we located the bus stop outside the departure area of the airport and saw the Alibus just past the McDonald’s Café. We purchased tickets for four euros each from the bus driver and soon found ourselves in the midst of the early morning-rush hour traffic of Napoli, on the way to the train station. I hate to say it, but from the bus, the area we saw of Naples looked dirty, and like I’ve observed in the past, with lots of trash in the streets, and overflowing garbage containers. I guess if this is the only view one has of Naples, the take-away is that this isn’t such a nice city. I know better and plan to return one day when I can spend time here, experiencing the wonderful aspects of this southern Italian port city.

Eventually, the bus driver dropped us off, and we had about a ten-minute walk to the Napoli Centrale station. Once inside, I located the biglietto veloce machines. I felt like a pro at these self-service ticket machines and purchased three tickets to Salerno at a cost of €8.50 each. Rick, Monica, and I found our binario and waited for the train. When we climbed up the steps of our carozza, train car, I was grateful we didn’t have to travel by train too many more times, as the luggage was, once again, a pain.

This was one of the older trains with the separate compartments for six people and no space for luggage except overhead. Rick was a gentleman, lifting all our bags to the shelf above, but then his shoulder began to hurt. This was only seven months since he fractured his clavicle, and I felt sorry for him. The compartment was hot, and I was glad the ride would be less than an hour.

Everything seemed to be running smoothly, because once we arrived in Salerno, the complimentary shuttle van from Hotel Olimpico pulled up outside the station and picked us up, as planned. We had pre-arranged by e-mail with Gaetano, the hotel’s owner, that the shuttle driver would transport us to the pier and take our bags back to the hotel, where we would   check in later.

At the ferry port we purchased tickets to go to Positano. We had just missed the ferry, so we had to wait an hour for the next one. Supposedly, the ride will take seventy minutes altogether; after thirty-five minutes the boat stops in Amalfi to load and unload passengers, and then thirty minutes later arrives in Positano.

The scenery was spectacular as we sailed along the Amalfi Coast. I had never seen this section of coastline from by boat, only by bus and car from the winding road above. We were taking photos the entire way. 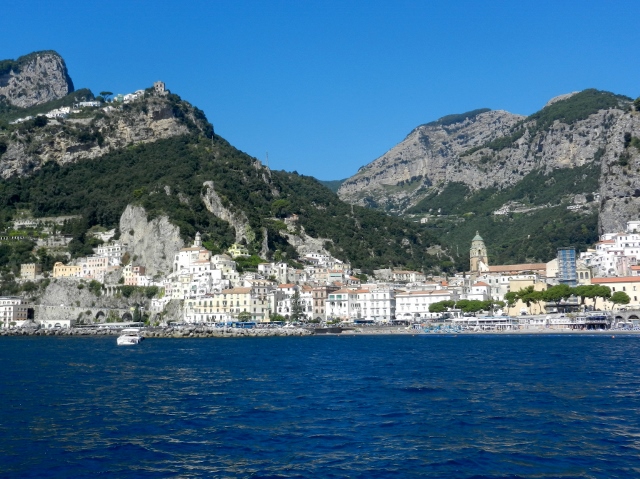 Once we arrived in Positano on this warm and sunny September day, we casually browsed the streets and shops of this gorgeous tourist spot.

After a while, we found a small, outdoor restaurant, away from the beach, for lunch. It was situated in a little piazza near the bottom of the steps which lead up toward the   church. The name seems unusual, Wine Dark House, but this explains it. “La casa color del vino,” the wine colored house, is on their business card. How interesting. The pasta pomodoro and green salad were perfetto today. Later I found a gelateria and enjoyed a cone with nocciola and stracciatella flavors. Mmmm.

We decided to take the 3:30 ferry back to Salerno and while we waited for the boat, we were treated to some free entertainment, if you could call it that. A tall, thin, tanned, elderly Italian gentleman was parading around the pier area in a Speedo. I had seen him earlier in the town near the shops. He didn’t seem to have an agenda other than to be seen. Exhibitionism at its best it Italy.

Once we arrived back in Salerno, while we walked back toward the town, we noticed two other Italian men in Speedos. These men, however, were not thin by any stretch of the imagination, and they were getting onto motorcycles. Way too much skin for me today.

We had to take a taxi back to the hotel since the shuttle had already been booked.  I realized what a luxury the shuttle is since the taxi fare was €30!

After some time to relax, we had dinner at the lovely covered outdoor terrace at the hotel. The margherita pizza that Monica and I shared was delicious. We were all exhausted from our early morning start and sightseeing in Positano, so we made it an early night. Tomorrow I am going to Sorrento by myself.

7 Responses to Leaving Sicily and on to the Amalfi Coast